By: Jose Ledezma and Raquel Córdoba

In simple terms, BPO can be understood as doing what you are good at and leaving to others those tasks that are not in your area of expertise. With an outsourcing model we seek to be more efficient while avoiding being left behind in the business world.

OTSi is a strategic partner that can help you leverage your business by providing you the right talent and technological tools.  Since we are dedicated mainly to the technology field, the following article focuses on the present and future of IT outsourcing services in Costa Rica.

When you think about outsourcing, you mostly likely imagine a company that hires less expensive, qualified personnel in a different country in order to reduce their costs. However, during the past 10 years we have witnessed the birth of small Costa Rican-capital businesses which saw BPO as an opportunity to create their own success stories.

Tholons, a consulting company that seeks to measure and maximize the return on investment for each country in terms of outsourcing, has provided a ranking worldwide to measure which country and cities have been more profitable in BPO solutions. Costa Rica entered the list in 2006, by 2007 they had achieved the 29th ranking. Costa Rica improved year after year until 2016 where it achieved its best ranking of 11th.  At this time it became the first country, and San José the first Latin American city, to be included in the list. 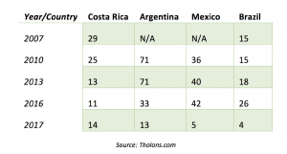 According to the Costa Rican Coalition for Development Initiatives (CINDE) Costa Rica had major positive changes during recent years in terms of foreign direct investment and as a country is always looking for continual growth. You can find more details on CINDE’s Web page following this link. 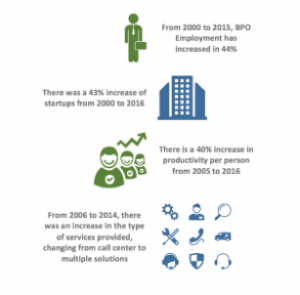 The Future of BPO in Costa Rica

The model of shared services and outsourcing (BPO) has evolved to a technological environment.  This has allowed it to continue growing and stand out as a generator of greater added value.  Its offerings are beyond that of a simple services or solutions.  Costa Rica currently offers:

– Highly qualified talent that can efficiently carry out tasks in areas such as networking and software development using global technologies
– Constant and continuous improvement of English language skills
– Qualified Trilingual staff; we can easily find people who speak Spanish, English, Portuguese or French
– Strong sense of responsibility from each employee, achieving the growth of their potential along with the company
– High decision-making capacity at a local level, allowing to streamline processes and act quickly

Even so, there are still areas of improvement in our country. As mentioned previously, we have highly trained personnel in the areas of networking and software development.  In addition, we have been working on successfully implementing Centers of Excellence to embrace new technologies and career development options to our citizens. OTSI has been making an effort to bring what the market calls developing emerging technologies into the country, such as:

Just as we talked about Six Sigma, Process Improvement and Quality a few years ago, today we need to talk about those trends that will allow us to be more profitable and competitive in the future.

If we do not invest in these areas, we can expect an uncertain future.  Costa Rica with the help of BPO companies like OTSi has been able to move to the next level by bringing these possibilities into our market. For example, multinational clients that are willing to bring new business and job opportunities to our country, have found Costa Rica to be the starting point of greater value in new technologies.  BPOs have found ways to help and fulfil the customer’s request by becoming a partner more than an outsourcer.

Many years ago, Costa Rica faced uncertainty on its cost models but due to the maturity that the market has reached in the last 15+ years, cost models have improved largely, making it easier for companies to use different contracting mechanisms. During a BPO negotiation in Costa Rica, a company is able to find and negotiate via different mechanism.  Some of the most sought after by our clients include:

In summary, Costa Rica has had exponential growth in terms of outsourcing models and, even managed to be the most competitive country in Latin American for many years. There are many possibilities in the market and the establishment of multinational corporations in the country guarantees a successful journey.

In search of the right provider

Fill in the online form